PONT has had a very busy and exciting 2019 and as the year draws to a close we wanted to re-visit some of our highlights of the year. We hope you enjoy re-visiting our key moments with us!

PONT Cymru worked with the Wildlife Trust and Natural Resources Wales to re-establish grazing on Overton Mere Nature Reserve on the Gower. Last summer, fencing was installed which had to extend onto the beach to prevent escapees. This provided an initial challenge but was overcome in the end. Following fencing installation, Dexter cattle from Gower Meadow Beef and ponies from Torcoed Welsh Mountain Ponies moved onto the nature reserve.

A new Cow Club was also formed on the Gower with PONT support, leading to the introduction of three Dexters to WTSWW The Dranges nature reserve. Six local families got together to purchase the cows and look after them.

We worked with Bridgend County Borough Council and Natural Resources Wales to produce ‘Digital Shepherd‘ is a new website which has been created to help children learn how conservation grazing plays a key role in preserving biodiversity in our countryside. 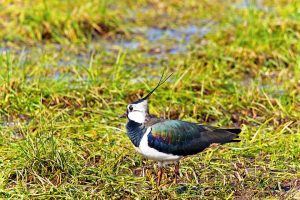 For the last few years, PONT have worked together with Wildfowl and Wetlands Trust Llanelli and graziers Kennixton Sheep to graze the site for ground nesting birds including lapwing. Ponies moved back onto the reserve in February and the sheep later in the year.

PONT leased GPS collars to graziers at Coity Wallia Commons and Kenfig NNR. These are linked to a phone app that dog walkers on the reserve can download to discover where the sheep and cattle are on site, in order to minimise negative interactions. This app is called Hoof Prints and is immediately popular with site visitors!

We also ran a training course in North Wales entitled ‘Dogs in the Countryside’, aimed at those managing sites used by dogs and their owners to get up to date with current policy and best practice and learn methods for practical management and networking. 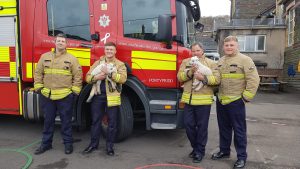 April saw big changes for PONT as our core Funding ends and we began to go it alone. This created many challenges but also opportunities for PONT!

PONT Officer Emma went back on the road with the Don’t Burn Bernie roadshow, in conjunction with South Wales Search and Rescue. This joint educational tour aims to reduce the incidence of deliberate grass fires by changing peoples’ attitudes, knowledge and behaviour. Together we visited schools across South Wales to talk about the devastating impact of fires on wildlife and livestock and how conservation grazing can reduce the impact of these fires by reducing the fuel load. 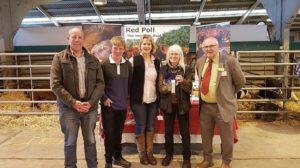 Ian Rickman with the winners from Red Poll Cattle Society

PONT attended the Royal Welsh Spring Festival to talk conservation grazing with our Grazer of the Week Jean. We sponsored the Cattle Breeds Society Stands competition at this year’s The Royal Welsh Agricultural Society spring festival. One of our directors Ian Rickman judged the competition and awarded the prize to the Red Poll Cattle Society – congratulations!

We also helped to establish a new Pasture Fed Livestock Association group in Black Mountains.The aim of the PFLA’s project is for groups of farmers to explore pasture-fed farming methods as a means to improving farm profitability. It was launched in response to the actions of some upland farmers who found they could improve business performance by managing land and livestock without grain-based inputs.

Over the course of the next two years the Welsh group will have the chance to hear from speakers, visit pasture-fed farms, conduct trials and learn together about future possibilities. 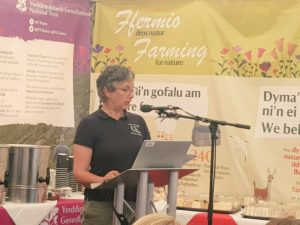 Hilary of PONT Cymru talking at the Royal Welsh Show

The new PFLA group had a talk from Neil Heseltine of Hill Top Farm in Malham.

PONT visited the Senedd with the Glamorgan smallholders to highlight the benefits of local produce.

PONT Officer Hilary attended the Royal Welsh Show and gave a talk on the National Trust stand showcasing the opportunities for an uptake of nature friendly farming and the profitability it can bring.

PONT Officers Jan and Hilary visit the Elan Valley to visit the heathland and bracken slopes with the graziers to discuss different management techniques, such as bracken rolling and creating heathland bedding. We also looked at how we could use sheep grazing to improve the habitat.

We also received the exciting news that our new Dolau Dyfi Project has been approved by the funders and we can begin work.

Farming for the Future

We work together with the Tir a Môr Llŷn partnership  and the National Trust on an exciting new trial of a ‘Payment for Outcomes’ agri-environment scheme on the Llyn Peninsula. The work is funded by the National Trust and the Welsh Government Sustainable Management Scheme.

Promoting the important role farming has in conserving the countryside and helping nature was the most important message shared at the successful Open Farm Event held at Cwrt, the  National Trust Farm near Aberdaron on Bank Holiday Monday.

PONT’s Making the Most of Your Wet Pasture Event

We held a ‘Making the Most of Your Wet Pasture’ event, where attendees had the opportunity to meet local farmers, landowners, ecologists and businesses to hear about the benefits of grazing marshy grasslands and the innovative technologies that can help.

PONT attended the Heart of the Valleys Show to talk about conservation grazing with local visitors, in conjunction with the Wildlife Trust of South and West Wales and Neath Port Talbot County Borough Council.

Initial funding came through for the Dolau Dyfi project and work on the ground really gets started. We began the process of recruiting a project officer for the project.

I’m looking forward to joining with Martin [UK Chair] and the Scottish and English chairs to put Nature Friendly farming on the political agenda, increase membership of the NFFN and raise awareness of the good work that many farmers are doing for wildlife. 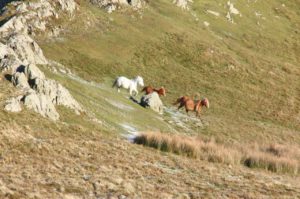 PONT Staff took part in the Carneddau pony gather. Working with organisations such as the North Wales Wildlife Trust, National Trust, Local Councils, RSPB and private individuals and farmers, we have found 200 of these ponies jobs and homes across Wales and England over the last 10 years. They are great for helping to manage a range of habitats, from fens to dunes to heathlands and grassland. This is because they are able to eat coarse grass, produce dung to benefit birds and insects, are extremely hardy and, being semi-feral, don’t bother the public.

The new Officer is recruited for the Dolau Dyfi project ready to start in January 2020.

PONT runs workshop on Cotoneaster Management on the Great Orme, on behalf of Natural Resources Wales.

We held our AGM in Pembrokeshire, which included a field trip looking at grazing in the Pwllderi area with Geraint Jones from Pembrokeshire Coast National Park.

We hosted a ‘Routes to Market for Conservation Grazed Beef’ talk. We found out about the benefits of conservation grazed beef, including routes to market with beef e-commerce specialist and BBQ king Olly Woolnough.

A big thank you to all our partners and customers – We would like to wish you all a very happy Christmas and New year.

PONT will be closed for a well-deserved Christmas break over the holidays – we look forward to 2020 and will be back in the office on 6 January.